If you’re struggling to get your child to stop sucking their thumb, then, of course, I don’t have to tell you that it’s much easier said than done. The struggle is real! Nevertheless, we were successful in our efforts. And it only took ONE NIGHT! Read on for the details.

It wasn’t until our daughter was just a month shy of her 4th birthday that we finally, and successfully, got her to stop sucking her thumb!

We knew it was inevitable. We knew our daughter needed to stop sucking her thumb. We knew it wasn’t good for her teeth or for the formation of them.

But we kept putting it off.

Until our pediatric dentist stressed the importance of our daughter quitting thumb-sucking at her most recent dental appointment. At that time my husband and I became determined.

We had to stop the thumb sucking!

We tried most of the suggestions that were supposed to help our 4-year-old daughter stop sucking her thumb. And every single one of them was unsuccessful. It wasn’t that it was bad advice. It was just advice that didn’t work.

Idea #1 Give her something to hold.

Nope, she can have both arms completely full and still manage to find a way to suck her thumb.

This works for a young toddler but not a savvy preschooler that understands what you’re trying to accomplish.

Idea #3 Encourage her not to suck her thumb.

This could be by telling her she’s a big kid and big kids don’t suck their thumbs. We even read a book with a similar message on thumb sucking. It didn’t work. It wasn’t effective because it wasn’t motivating enough.

Besides, since when does telling your child not to do something actually work when it comes to parenting?! They’ll just dig their heels in and do that thing even more than before, if for no other reason but to prove they have control. That’s like telling your child to sleep and bam! they sleep or eat and bam! they eat.
“My child is always completely obedient 100% of the time.” – Said No Parent Ever

Related Post: How to Get Poop Smell out of a Stroller with a Non-Toxic Cleaner

Idea #4 Let the child stop thumb sucking on their own.

I had heard stories of other 4-year-olds that stopped sucking their thumbs on their own. For some of them, a new sibling arrived and the parents were too busy so the child ended up quitting on their own. For others, their friends at school made comments about their thumb sucking that made them feel embarrassed about it so they stopped.

Neither of those scenarios was going to happen for our daughter.

What Did Stop Thumb Sucking

What DID work to help our child stop sucking her thumb was a bottle of Mavala Stop Nail Polish.

And it only took ONE NIGHT!

One small bottle of nail polish and one night.

It took one sleepless, heart-wrenching night. But it worked.

After that night she completely stopped sucking her thumb.

Here’s how it went.

This was her warning.

Then one night we decided it was time. My husband and I were both on board and ready to tackle this issue for our daughter’s sake. We got the Mavala Stop nail polish, as recommended by our dentist.

Once she was fast asleep, we applied the Mavala Stop Nail Polish to both of her thumbs (in case she tried to suck the other one and so both thumbs tasted the same for continuity’s sake).

When she came to a point in her sleep where she tried to self-soothe by sucking her thumb, she was very upset!

In the still of the night, around 1am, she began scream-crying intensely, yelling “It’s spicy!”

So I came into her room and held her in my lap to help comfort her. I grabbed a few of her favorite stuffed animals to help her self-soothe with those. I gently reminded her about her thumb not tasting good one day.

She continued to cry and cry and try to suck her thumb, as though perhaps the taste had changed, only to erupt in more crying and lamenting that it hadn’t.

Finally, she fell asleep from exhaustion, only to awake again when her reflexes brought her thumb to her mouth. She would erupt in scream-crying again and the cycle continued.

It Only Took One Night

It was a rough night, to say the least, but it only took one night.

After that night, it was clear to her that she could no longer suck her thumb.

I must say, though, it was almost like a piece of her babyhood died that night. It seemed that she realized that she couldn’t suck her thumb despite her multiple tries and that from that point onward it wouldn’t be a source of comfort. I felt bad for her.

But I also felt it was somewhat like a right of passage. And really, the time had come.

Will This Help Stop Your Child’s Thumb Sucking?

If you’re desperate to help your child stop sucking their thumb and you don’t think they’re capable of ending it on their own, then I highly recommend using the Mavala Stop Nail Polish.

Since I wanted to know what my daughter was experiencing, I applied the nail polish to my thumb to see for myself what it tasted like. It was disgusting! It was spicy and nasty at the same time. I had to drink or eat something to get the taste out of my mouth! Almost like when you eat a really spicy pepper on accident and you’ll do anything to get the taste out of your mouth. It’s unpleasant and it definitely lingers. 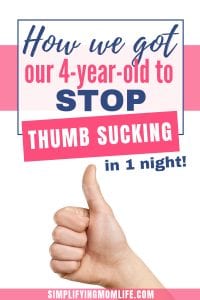 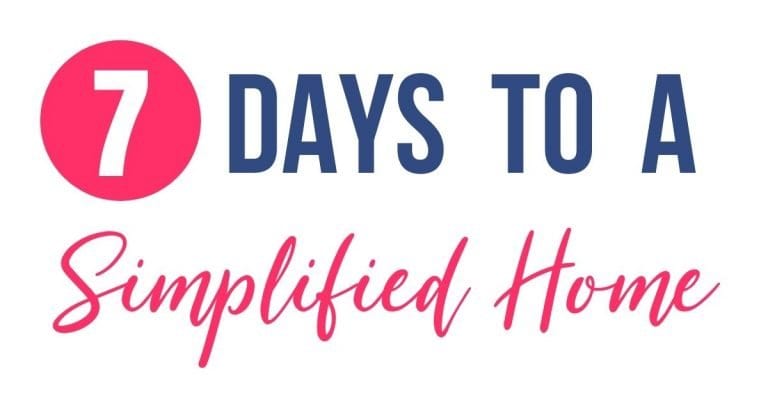 Helping moms simplify + streamline their home with tips for #organizing and #decluttering! | FREE GUIDE to Simplify Any Space in Your Home 👇

⭐ Tip to Simplify Tupperware: only buy a few siz

Take 10 minutes today to OPT-OUT of anything and e